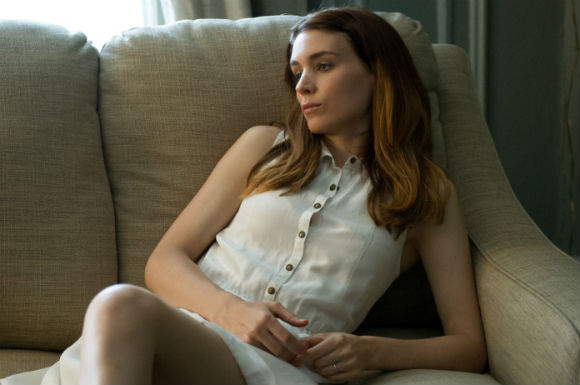 Absolutely absorbing and diabolically clever, Side Effects serves as a fitting theatrical swan song for Steven Soderbergh, who has announced his retirement from directing feature films.

Soderbergh has developed a wonderful mastery of visual storytelling, consistently experimenting with the boundaries of commercial cinema so as to deliver distinctive films that tease any limited definitions of “mainstream” vs. “arthouse” works. Within his films, there is often a battle between the warmth of the colors and the coolness of the characters; sometimes that’s flipped, so that the colors cool off and the characters heat up.

His distinctive approach is entirely appropriate for Side Effects. Rooney Mara (The Girl With the Dragon Tattoo) empathetically emobodies the troubled Emily, a 28-year-old woman who is suffering from depression. After a brief, ominous prologue, the story begins with the release from prison of Emily’s husband Martin (Channing Tatum), who served four years behind bars for insider trading.

Martin is properly remorseful, yet determined to quickly regain the comfortable, prosperous lifestyle that he and Emily previously enjoyed. During his prison term, Emily moved to Manhattan and got a low-level job in an advertising agency, where her boss is sympathetic to her troubles. Still, Martin’s return does not cure Emily of her sadness, and an apparent suicide attempt brings her in contact with Dr. Jonathan Banks (Jude Law), a kind, sympathetic doctor.

Dr. Banks consults with Emily’s previous doctor, Dr. Victoria Siebert (Catherine Zeta-Jones), who treated Emily when she lived in Connecticut. Then Dr. Banks prescribes a series of drugs for Emily, none of which are effective. Finally, he presents her with the opportunity to try Ablixa, a drug available only on a trial basis to qualified patients.

Now, the complicating factor there is that Dr. Banks has accepted a healthy consultant’s fee from the pharmaceutical company that manufactures the drug. There’s nothing illegal about what he does; he discloses his financial interest to Emily aforehand, and the choice is hers. But, but, but … the drug is available without cost to Emily and is recommended by her trusted physician. What choice does she really have?

Up to this point, Side Effects has developed an uncomfortable degree of tension. It’s as though everyone is holding their breath, waiting for something bad to happen. That’s accomplished by the complex structure of the original screenplay by Scott Z. Burns (Contagion), Soderbergh’s direction and photography (under the pseudonym Peter Andrews), the pinpoint-strong editing, and Thomas Newman’s discordant music score.

Add to that the layered performances by Mara, Law, and Tatum, and the story feels like the tragic tale of good characters who are caught up in a very bad situation. There are no villains; instead, the movie feels like a good-faith effort to depict a mental affliction that affects a great many people across all social classes and ages.

Mind, it’s still a vastly entertaining movie, one that seeks to tear up the carpet and expose the underpinnings of similar dramatic thrillers, as if to boldly proclaim, ‘No, this is how to tell this kind of story.’ And, of course, it highlights Soderbergh’s delight in tearing apart something built with solid genre construction and remaking it in his own, cool, intelligent, post-modern image.

In the end, it’s all a bit ridiculous, but by the point that “something else happens,” I was so caught up in the film’s narrative rhythms that I was happy to follow wherever Soderbergh and his collaborators wanted to take me. Side Effects deserves to be treasured, analyzed, and appreciated as a rare, fresh take on “mainstream” cinema.

Side Effects opens wide across the Metroplex today.