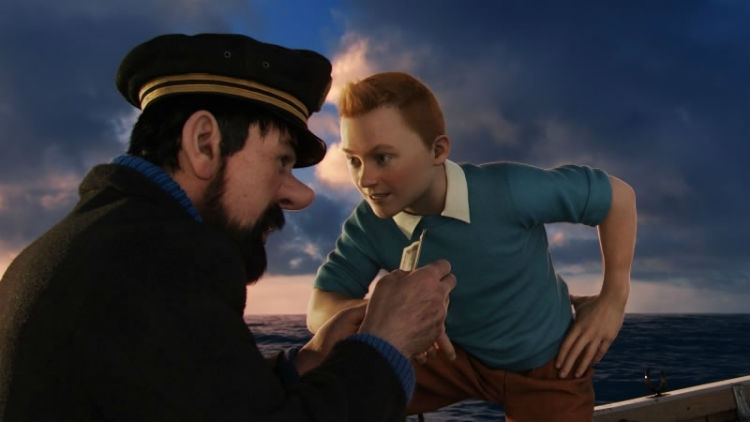 Steven Spielberg may have just turned 65, but he’s still in touch with his childhood sense of awe and wonder. Thus, calling ‘The Adventures of Tintin’ a “movie for kids” can be considered a compliment; it’s easy to imagine that children will be completely captivated by the story of a young man and his dog who go chasing around the world in search of … er … something or other.

For adults, however, the movie plays more like a greatest hits collection, with the novelty of motion-captured animation to dazzle the eye. (The bonus distraction of 3D is splendid, though perhaps not essential.) Of course, since we’re talking about Steven Spielberg, even recycled action sequences are very dazzling indeed.

Tintin (Jamie Bell) is a newspaper reporter who consistently makes the headlines, smashing crime syndicates and discovering hidden treasures. He buys a model ship from a marketplace vendor for a modest price and is immediately approached by two different men offering to buy it. Soon after, the model ship is stolen and Tintin is off on a new adventure with his faithful little dog Snowy. He crosses paths with fun-loving drunk Captain Haddock (Andy Serkis), who joins the team on their globe-trotting quest.

The script, credited to Edgar Wright (‘Shaun of the Dead’), Joe Cornish (‘Attack the Block’), and Steve Moffat (‘Doctor Who’), is based on parts of three different books by Tintin creator Herge, which may be why the plot was difficult for this Tintin neophyte to follow. To the film’s benefit, however, the screenplay is a source of much amusement and creative wit, with sharp jabs in the dialogue poking fun at the rather bland, anonymously heroic (and villainous) characters and situations.

The voice work is also quite good, with well-known names such as Daniel Craig, Simon Pegg, Nick Frost, Toby Jones, and Cary Elwes disappearing behind their very different-looking on-screen characters. Such is the freedom allowed by motion-capture performance with animated characters; the body language may be preserved, but the body (and face) of the actors can be changed at will.

What’s most fascinating about the movie is probably that Spielberg’s recognizable style of directing — the signature camera movements, pans, push-ins, dissolves, and the like — is preserved. This week offers a unique opportunity to see two new movies by a major director in theaters at the same time. While watching ‘The Adventures of Tintin’ and ‘War Horse’ back to back is not necessarily recommended, the films serve as a stirring reminder of Spielberg’s continuing, and distinctive, talents.

And if ‘The Adventures of Tintin’ adds up to nothing more than a sugar rush, it’s still one of the more consistently delightful family films of the year.

‘The Adventures of Tintin’ opens wide across the Metroplex today.