Where else but in the wild and wacky world of Anime would you find a pint-sized superhero with transmutable metallic prostheses and his giant robot brother squaring off against a ferocious “wolf chimera” (i.e., werewolf), in an attempt to capture an escaped terrorist alchemist (i.e., black magician) bearing the deceptively mild-mannered name of Melvin Voyager?

(Not exactly a moniker designed to strike fear into his enemies… but then he’s got deadly energy beams emanating from his hands to take care of that.)

Throw in a bunch of mysterious swooping human bats, two powerful empires bent on wresting territory from each other, and the exploited residents of a once-proud nation caught in between, and you’ll start to get an inkling of just how much is going on in ‘Fullmetal Alchemist: The Sacred Star of Milos,’ director Kazuya Murata’s feature-length animated action-adventure drawing on characters and themes originated in the long-running manga series.

For English-speaking autiences, Murata’s 110 minute Japanese-language anime may seem considerably longer, thanks to the need to frenetically read subtitles while non-stop action takes place on the screen above. Occasionally it’s a matter of deciding which is more essential: following the threads of the remarkably dense storyline (via the dialogue) or keeping close watch on the action to discover whose magical spells and energy beams will emerge triumphant.

(In military terms, it’s a lot like the balance that must be struck between strategy and tactics.)

But enough of this logistical grousing: Divided attention obviously won’t be an issue for Japanese-speaking audiences, or for those viewing the dubbed-in-English version (awaiting the feature’s forthcoming release on DVD and Blu-ray). If you do see the film during its North Texas theatrical release, simply be prepared to encounter plots within plots intersecting with other plots, with nary a pause for reflection in store. As such, it would behoove one to show up with wits fully engaged. A strong caffeinated beverage (or other mental stimulant) might be called for.

(Either that, or just have another beer and let the colorful fast-action visuals wash over you like a techicolor fever dream.)

Edward and Alphonse are the titular replacement part heroes of the tale, with Ed being the mostly humanoid one and Al inhabiting the big metallic suit of armor. Seems they lost their various anatomies when attempting a forbidden transmutation spell in an attempt to converse with their dear departed mom. Those desiring to keep their corpus intact would do well to steer well clear of the Doorway of Truth that Ed and Al once darkened.

In an equally precarious position, in terms of soul-damaging magical intent, is 16-year-old Julia Crichton, whose alchemy-practicing parents and brother were ravaged either by the forces of darkness or wolf chimeras — or quite possibly both — when she was considerably less nubile than her miniskirt and tight sweater reveal her to be at present. Julia has been living with the downtrodden residents of Milos, a slum-like community at the bottom of a canyon between the warring nations of Creta and Amestris. 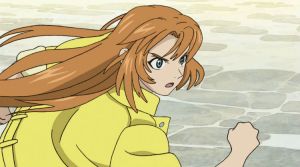 Julia (along with various others) is seeking the secret location of the Star of Fresh Blood — an ill-begotten mythical gem whose possessor stands to gain “a way to unlock the world’s truth” and, tangentially, open up a portal to another reality. All very Lovecraftian, though without the bothersome, overwrought, insidiously hinted-at amorphous dieties and non-Euclidian geometries.

Having witnessed first-hand the way the Milosians are being dumped upon by the current residents of Table City, Julia is determined to aid them in their quest to rise above the garbage that constitutes their home and re-establish the glory that once was Milos. Even if it means risking her innocence and becoming a vessel for an unholy power in the process.

Aside from the fact that it takes college-level reasoning ability to keep track of the ins and outs of what’s going on, Fullmetal Alchemist deals with the adult-ish themes of geopolitical alliegiance, personal sacrifice and moral compromise; in addition, it’s really quite violent, with the Star of Fresh Blood living up to its name in the film’s first climactic sequence (of which there are at least two).

For me, the film’s action highlight occurs early on, when Ed faces off against his were-villain antagonist atop the speeding cars of a passenger train. As it crosses the maze of vertiginous canyons in its approach to Table City, it’s possible for a few fleeting minutes to ignore the ponderous layers of backstory while two characters risk life and limb in a toe-to-claw, cliffhanging battle.

As far as I’m concerned, it’s all downhill (to Milos) from there.

OBVIOUSLY NOT: “Even if this is a trash pile, it is not an ugly world.”